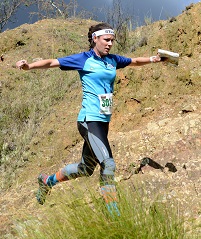 Meet your Board member.

This is the eighth in a weekly series where we introduce you to the people entrusted to run our sport in NSW.

Briohny Seaman is our Board member with elite orienteering experience.

The youngest member on our Board was in four winning NSW Schools teams and has represented the NSW Stingers on and off for around 20 years.

Unfortunately, injury has plagued most of Briohny’s elite years. In 2009 she had lower leg issues and in 2013 was diagnosed with a rare vascular condition. She decided to wait until she’d had children (Ryder in 2012 and Logan in 2014) and they were older before having major surgery in 2018.

The enjoyment of orienteering and running has definitely returned since then. And she rates going to the World Masters in 2018 as one of her career highlights.

Briohny had never given any thought to being on the Board until approached last year. The opportunity to have input into the way the sport is run at a state level interested her.

And with Waggaroos struggling with membership, Briohny knows it’s important for her and the club to find ways to encourage and keep new members.

She has been on the Waggaroos committee and is now keen to get more involved in getting orienteering into local schools.

Briohny loves course setting and has set at a number of State Leagues, QB3 2017 and Oceania 2019.

Professionally, Briohny has worked for the NSW government for 16 years. Firstly, with Roads and Maritime Services and now with the Environment Protection Authority.

Both roles have given her exposure to various types of stakeholder engagement: with communities, local councils and other state organisations.

Her family started orienteering in 1988 (when Briohny was 6), after her parents Alex and Debbie Davey took the family to a Waggaroos “Come and Try It” event at Pomingalarna.

Briohny then grew up orienteering with a big group of local families: the Joneses, Dickinsons, McGarvas, Johansens and Mackens.

It’s this strong sense of family and community you’ll find throughout orienteering.