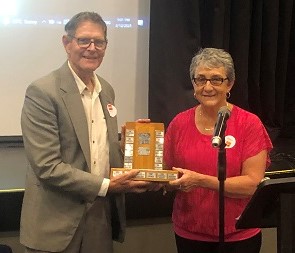 It was a double celebration on Friday night as Bennelong Northside were awarded Club of the Year at their 50th anniversary dinner.

Australia's first constituted club formed in December 1971, and around 80 people were at Balgowlah RSL to celebrate the milestone.

Little did the attendees know they were also taking out the Club of the Year award for the first time since it was introduced in 1994.

They had to do all the leg work (extensive landowner negotiations, setting, checking and tagging sites etc) twice due to covid interruptions.

The 50th dinner brought together many past presidents. Founding members of BOO and NOSH (clubs which merged to form Bennelong Northside) told how they started in orienteering and what has kept them in the sport for so long.

A big thank you to dinner organisers Linda Mandin and Katherine Cameron, to MC Julian Ledger, to Sharon Lambert for tracking down past members, Peter Hopper for collating the history, and Janet Dawkins for the fascinating historical display.

The rest of the ONSW major awards will be handed out during the Xmas 5-Days carnival in the Southern Highlands.