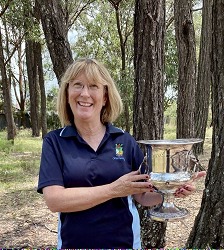 Congratulations to Barbara Dawson (Garingal) who has won Orienteering Australia's Silva Award for Services to Coaching.

Barbara has done long-term work in schools in NSW and at local club events, and contributed to the National Schools Kit Project.

She has also been a stalwart at the River and Bay Series as the lead coach for newcomers and in helping other club members in instructing first-timers.

This award caps a big six months for Barbara who won the Cox's Cup (ONSW Encouragement Award) in 2021.