The best thing I have ever done!

'The best thing I have ever done' was the verdict of a Glenmore Park boy after his day orienteering in the Sydney West Regional Schools Championship last Wednesday 23 May.

Seven schools, 4 primary and 3 secondary, turned up at Fred Caterson, Reserve Castle Hill to test their skills on Ted Mulherin's clever courses. It was a beautiful day and the venue provided bush tracks, rockfaces, playing ovals, and even a termite mound or two.

The morning started with a map walk led by 7 ONSW volunteer coaches.  This is an excellent way to introduce the electronic timing as well as the map.  Some of these runners are very confident now as they have taken part in the event for the last 3 years. Then came the age races - children going in all directions after a 1min sneak preview of the map.  The pressure was on in all 10 divisions.

Our 2 ONSW 'walking wounded', Chris Crane and Gordon Wilson, churned the finishers through while Jai Di Tommaso kept the results flowing onto the results board. 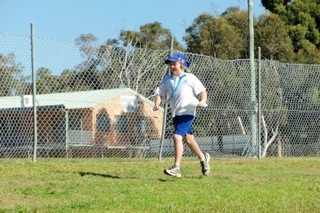 Kingswood HS took most of the secondary places with Glenmore Park HS claiming all positions in the Boys 16 and over.  Pendle Hill High School claimed an easy win in the Boys 12-13 division.

After the individual races came the Relays and lots of excitement.  Most runners were visible most of the time and the 'encouragement' given by waiting runners was deafening. The girls team from Samuel Terry PS showed a clean pair of heels to the rest of the runners and were such excited winners that they were leaping around the arena.  The combined teams of Pendle Hill HS and Glenmore Park pushed each other to their limits with the teams positions changing with each runner.

Thanks to Lyn Malmgron for this report, and Neville Fathers for the photographs