Why did the Turkey cross the road?

Presumably he was trying to catch up with Glen Horrocks at the annual Turkey Trot!  Cool weather meant the Turkeys in the annual Western Hills race were rugged up for their races, but the competition was piping hot.  The Turkey Trot is a set of orienteering races which have a mass start for each course 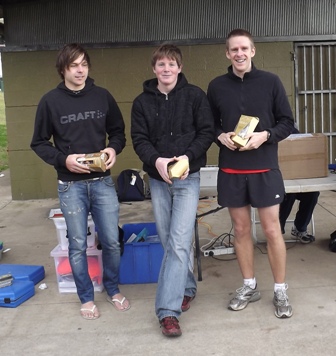 length.  The orienteering standard is moderate so it favours the runners with fitness and leg strength.  Ian Miller's courses this year used multiple maps around Baulkham Hills which provided street running interspersed with thoroughly enjoyable runs through park and semi-bushland.  That said, there was enough orienteering to make sure that competitors had to concentrate.  Minor errors and hesitations were often the difference between staying ahead of the next competitor or having them draw close enough to challenge for placings.

In the Men's Long race, three stalwarts of the Sydney Summer Series put in some fine running to take the top places.  Glen Horrocks held off James McQuillian (2nd) and Steve Ryan (3rd) over some 20km with only the narrowest of margins- 98:18 to 98:27 and 98:59.  In the Men's Medium race Newcastle's Josh Blatchford romped around the 12km course in 66:51 ahead ofDaniel Hill and Andrew Povah.  The Womens Long was won by Barbara Hill in a time of 119:32, which would have put her in the top six in the men's race.  Margaret Jones stole the lead from Brook Martin in the Women's Medium course, when Brook's concentration on the finish caused her to run right past the last control.  A sprint back to rectify the error was not enough to keep the lead and she took 2nd place with Gayle Quantock (Newcastle) in 3rd.  In the Men's Short course Timothy Petterson took 1st place with Darius Cartright of Mountain Devils showing what strong mountain biking legs can do on a foot course, taking 2nd place ahead of wunderkind Duncan Currie in 3rd. Susan Petterson ensured it would be a sweet Sunday in the Petterson household by winning 1st prize and a box of chocolates for the Women's Shortcourse. Karin Heffner and Bryony Cox took 2nd and 3rd places making a clean sweep for the Garingal club in the Women's Short course.